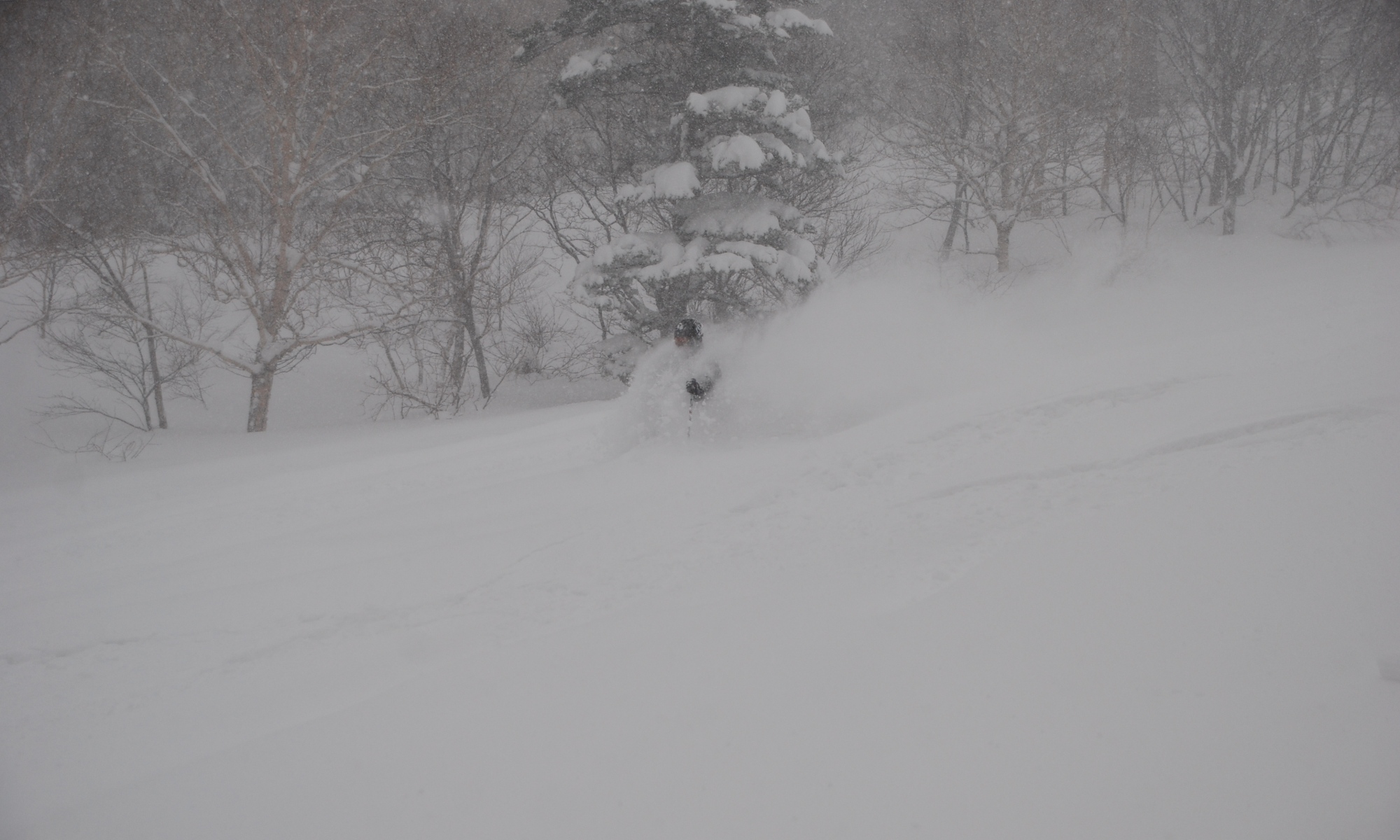 With untracked powder becoming more difficult to find (especially inbounds), many of us are being forced to seek out untracked lines beyond resort boundaries. For those of us with little to no experience skiing in the back-country, arranging your first adventure can be daunting, even foolhardy – especially if you are ill prepared, or unaware of the risks.  Hiring a guide under these circumstances is recommended.
On a recent tour to Hokkaido, Japan, Snowriders WA discovered a fantastic option for those wanting to experience deep powder for the first time.  It is a safe an easy option and no trekking is required.  All runs are accessed via over-snow transport, a ‘cat’.  For an honest account of our experience, read on…

February 2013.  We are at Iwanai, a small seaside and now disused ski resort about 45 min drive north-east of Niseko United, Hokkaido. Our hosts for the day are the crew from NOASC, a cat-skiing adventure tour group based in Hirafu, Niseko. The group caters for small groups (max 9) of intermediate to advanced skiers. Tours leave Hirafu in the morning and return late afternoon. Powder skis (the ‘fattest’ you can find) are a must and can be hired from NOASC, or you can bring your own (along with a snorkel). 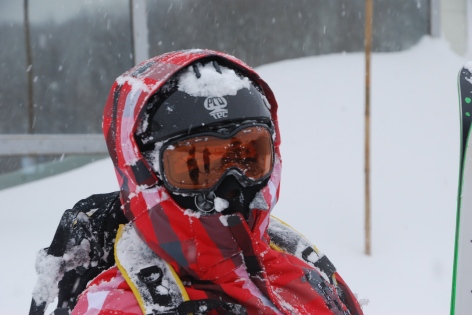 Caption: Clare from Melbourne, Australia, ecstatic after her first run
The great thing about Iwanai is that is now a largely abandoned ski field.  While one of the lifts was operating for school children at the bottom of the resort, none of the upper lifts were running, leaving 95% of the resort untracked.   What was once a series of intermediate ‘groomers’, is now a powder highway, 3-4 lanes wide with no trees, crevices or any great risk of avalanche.  This made for superb easy skiing, irrespective of ability level.
Our group consisted of three skiiers and one snowboarder, ranging from intermediate to advanced / expert level.  No one in our group experienced any great difficulty on the day, and everyone enjoyed the experience. For first time powder skiiers, the relative freedom to make wider turns (at slower speeds) was really comforting, and free from the intimidation that comes with skiing steeper terrain in the back-country.  The most troublesome aspect of the day was extracting ourselves from the near 70 cm of powder snow after a tumble.  Luckily our guides were always on hand to help. 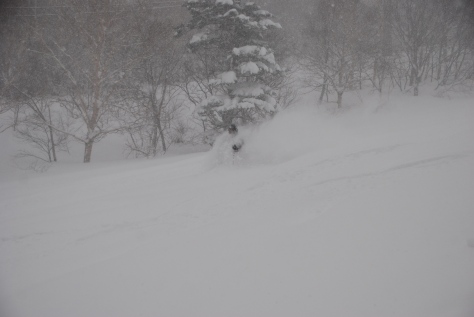 Caption: The author (Perth) in serious need of a snorkel

Tours can be customised to suit all levels of skier from intermediate to advanced.  On our visit, for example, some of our groups were able to sample some of the more difficult terrain.  The somewhat terrifying aspect of this, our last run for the day, was we were required to ski a derelict lift line. The most worrisome part, as pointed out by our guides, were the steel support cables stretching-at a 45 degree angle-from the top of the lift towers to the base of the ski run (some 4-5m under the snow!). These were clearly a ‘decapitation’ risk, and we were all advised to ski with caution, and stay with our guides.  With a delicious mix of fear and excitement, we pushed on.
We dropped in tentatively, first traversing and then emerging at the top (and slightly left) of the old lift line.  From here, we looked over the most delectable selection of lines. Fear dissipated as we dropped in, this time bouncing gently from one pillow of snow, to the next, across and into the next line. The feeling of weightlessness through those few turns is difficult to describe in words.  Although relatively short, the 10-15 turns I made were easily the best of my life and their were several ‘involuntary and very audible ‘whoops”, as we descended. The steel cables were safely negotiated thanks to our helpful guides who rode ahead and warned us of the cable locations, allowing us to glide past without any real concern or risk (despite my suspenseful introduction :-)).
The images below were captured on the main pistes. 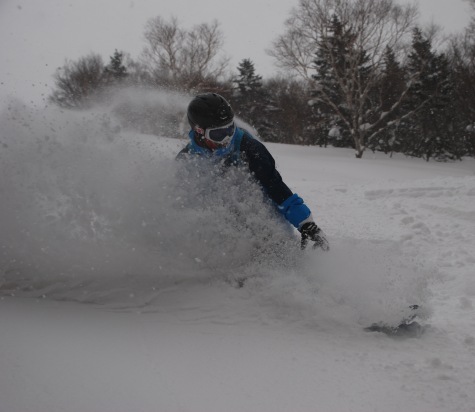 Caption: Paul (POS), Melbourne, Victoria, carves his snowboard through some of Iwanai’s finest 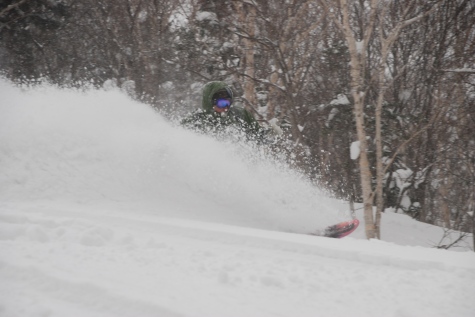 Caption: one of our American friends, also on the tour 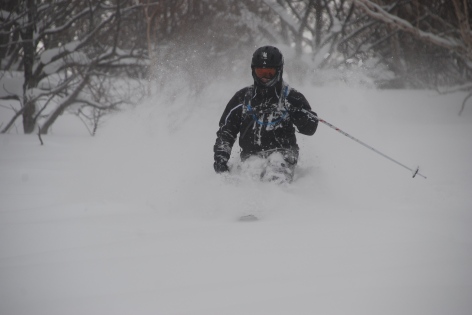 Caption: The author (Perth, WA) emerging from the waste deep albeit for just a second 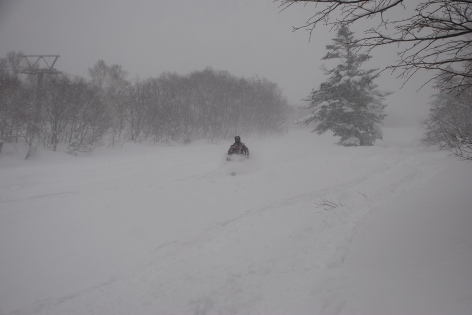 NOAC cat-skiing runs from Late December to early March. As the name suggest, access to the top of the mountain is via snow-cat (actually a converted Kassbohrer). Distant zoo-cart-memories (ala retro Hotham style) came flooding back as we climbed the ladder (always fun in ski boots) and sat in the open air in a series of bench seats.

The tour was run impeccably well. The guides were professional and highly safety conscious. All tour participants received avalanche beacons (and training). Guides stayed with the group at all times, and were ready to assist when the most innocuous stack resulted in almost complete under-snow burial. The biggest risk to tour participants was lack of fitness. Deep powder is hard work, and despite only skiing 6 runs for the day (3 before lunch and 3 after), we were all well and truly stuffed.Our  advice for those contemplating the tour is make sure you (a) ski/board at at least strong intermediate level and (b) have several days of on-snow conditioning prior to tackling it – especially after heavy snow falls. 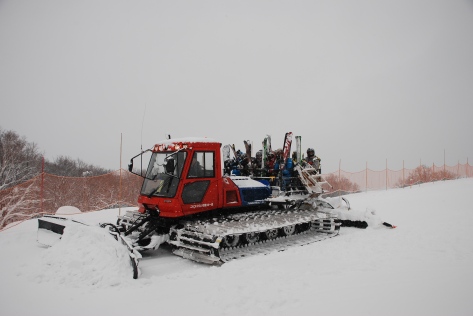 Caption: our chariot for the day.

Costs for the day include lunch – a fantastic all you can eat Japanese buffet: Traditional ramens, several types of protein and rice (with ice-cream for dessert). Like the majority of Japanese food in the region, everything was delicious.