Tignes (pronounced ‘teen’) is the second highest resort in Europe and forms one half of the gigantic Espace Killy ski area. The resort is actually split into five villages; Val Claret, Le Lac, Le Lavachet (some folks consider Lavachet part of Le Lac) Les Boisses, and Les Brevieres. The four villages sit at various altitudes between 2,300 m and 1,550 m around the bottom of a huge bowl.
The original village sat lower in the valley, but was flooded by the construction of a hydro-electric dam in the 1950’s. The remains of the village are visible when the lake is drained for maintenance once every ten years! I have also heard rumours that you can scuba dive through the old village in the summer too… The whole of Tignes ski area is accessible on one lift pass, with the option to upgrade your pass to access the neighbouring resort of Val d’Isère, the other half of Espace Killy.

Tignes is part of the Tarantaise — a large valley containing some of the most famous resorts in France, if not Europe. All of the resorts in the Tarantaise are extremely easy to get to and Tignes is no exception. At the eastern end of the valley floor the town of Bourg-Saint-Maurice is the gateway to the Espace Killy (as well as Paradiski and several other smaller resorts). Bourg is accessible via rail and road. We flew in to Geneva, and from there it was a 3 hour train journey through the Savoy region of France. Trains in France are generally quite cheap — for the two of us it cost about $60 total to get from Geneva to Bourg.

Once you’ve reached Bourg it’s a €12 ($18) coach ride up the mountain, which takes between 30 minutes and an hour depending on which village you’re staying in — but if you easily get bus-sick like me, make sure you don’t take a bus that goes to Tignes via Val d’Isère! It’ll add at least an hour on to the journey. You could also fly to Chambray or Lyon and take trains from there — Chambray is closest and therefore has the shortest transfer time but is also the smallest airport (less choice for flight times and more expensive flights). For those coming to Tignes from the UK it’s possible to take the Eurostar train direct from London to Bourg-Saint-Maurice, although it’s quite expensive, and you can cut a lot of that cost by changing in Paris. 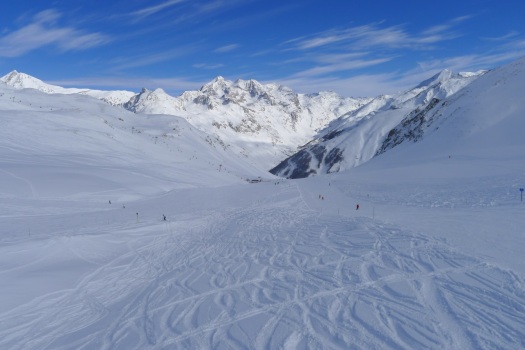 Once you’ve arrived in Tignes you’ll be spoilt for choice at where to ski first! It will be largely dependant on the village you’re staying in, and each village is served by one or two major chairlifts to take you up to the mid-altitude slopes. With over 35 lifts and over 70 trails, there are plenty of options for both skiers and snowboarders of all ability levels. For beginners there are several ‘ski tranquil’ areas with short lifts and gentle green runs to warm up for the steeper slopes. At the other end of the spectrum advanced riders can enjoy the ‘ski natural’ pistes: ungroomed pistes that offer somewhere between black run and off-piste skiing, while still patrolled by the pisteur-secouristes.

Despite the large number of lifts available there are relatively few options for descents from the top of each chairlift. Tignes has a way of forcing you into one of many scenarios where from the top of a lift, the only options seem to be a blue run back to the lift you just got off of, or a red run to the next lift along the mountain. This doesn’t necessarily detract from the skiing but it does make sure you need to pay slightly closer attention to the piste map to ensure a varied day’s skiing.

Due to it’s enormous altitude, much of the resort is open and exposed to the elements, however there is some excellent skiing on the lower slopes towards Les Breviaries (far right on the piste map!) with lots of interesting cliff formations, frozen waterfalls, and some excellent tree-skiing too. For the opposite of that, take Funiculaire Du Perce-Neige to the highest point in Tignes and some wide open skiing on the Grande Motte glacier, where you can even ski a few hours a day in the summer!

Again, due to elevation Tignes is one of the most snow-sure resorts in the alps (and therefore one of the most popular!). The week we were there five out of six days were reset days, with the whole mountain offering fresh tracks and no sign of the previous day’s skiing! Unfortunately with that level of snow comes an equal amount of cloud, which can settle over the entire resort and make navigating a little tricky. On the days when visibility is almost at zero, bear in mind that in the piste markers on the right hand side of the piste all have orange tips (while the poles on the left don’t). When things get really bad, just make sure that you don’t ski between two poles with the same colour tops!

Of course it only takes one day of bluebird conditions to completely forget that clouds ever existed. And because of the sheer size of the skiable area Tignes has to offer, usually it’s only a matter of heading up or down to get yourself out of the cloud and back into slightly more comfortable territory. Top tip: if the cloud hasn’t shifted by mid morning, get yourself down to Les Boisses and Les Brevieres for the best visibility on offer.

Going skiing in Tignes early in the season is a fine line — usually there isn’t much snow to be had before Christmas, making Christmas, New Year and January your best bet for a combination of deep snow and empty lift lines. As with any resort in the French Alps, it can be very difficult to find a quiet week skiing beyond January. In February and March, the whole of Europe seems to be on school holidays, which I could never get my head around until someone explained to me that in France and Italy, the school holidays for different regions are deliberately staggered to allow families a week in the mountains! What a marvelous example of European efficiency. In general the two main weeks to avoid are the Parisian holiday and the English half-term holiday — they change dates every year but a quick Google could save you a lot of time shuffling around in a queue for the chairlifts!

Tignes has a huge variety of accommodation options, from fully catered private chalets to self catered apartments in the tower blocks that are so quintessentially Alpine. The best thing about Tignes accommodation is that whatever you choose, the slopes will be ultra accessible. A large proportion of the accommodation is ski in ski out, and for those places a little further from the slopes, there’s an excellent free shuttle bus service that winds it’s way up and down the villages to get you where you need to go.

As with any resort in the Alps, the skiing is only half the story! The day is only really getting started when the last lift closes and there’s more often than not a huge group of people dancing around a DJ with his head out the roof of some Jeep / snowmobile hybrid at the rond point des pistes. Don’t worry about being put off either, these seemly impromptu dance parties are pretty family-friendly with the kids zipping around on toboggans while everyone else enjoys a vin-chaud or three.

If you’re willing to stay out a bit later my advice is to find somewhere that the bartender is sitting on what seems like the wrong side of the bar, holding court to a bunch of his mates! These are the most authentic places going, and don’t worry, he will still be able to reach the beer taps from where he is! The relaxed attitude is typically French and in a place like that, you’ll automatically be started a tab, and you might even get a funny look if you try to pay after each round of drinks. That’s not necessarily true in a busy bar though. If in doubt, copy the locals!

The quality of the restaurants in the alps is enough reason alone for some folks to travel, and Tignes is no exception, so it’s definitely worth keeping some room in the budget for two or three meals out. To help balance the cost there’s at least one ‘Sherpa’ supermarket in each village. Some people will tell you that it can be expensive to shop up the mountain but I have never really found it to be the case.

At lunch you won’t be short of options for food up the mountain — and again following local habits is your best bet. The service is often not very good at some of the higher-end restaurants, and the food is often overpriced to go along with it. I much prefer to find a quieter lodge with a fire going, a self service buffet and a full sized bar! If you notice a pisteur-secouriste tucking into a little warming Genepy with his lunch that’s usually good sign. My favourite restaurant for lunch in Tignes is at the top of the Chaudannes chair lift. Plenty of room to hang up wet clothes for half an hour, huge plates of salad and chips, soups with more cheese than soup, and goblets of Leffe beer to wash it all down. Bliss!

All things considered it would be hard not to have a really amazing week’s skiing in Tignes. Combine bucket loads of snow, ski in ski out accommodation, the option to eat somewhere different for breakfast, lunch and dinner each day, and bars where you might even be allowed to pull your own pint — you’re surely onto a winner!

My favourite part of Tignes is actually the lowest village of Les Breviaries, which offers skiing through the trees and a smaller, more traditional atmosphere in the village. It’s also the smallest of the villages which means the pistes home at the end of the day are likely to be slightly quieter and in better condition than you mind find of the highways leading back to Val Claret and Le Lac.

Bonus! Five top tips for an awesome week in Tignes