By our roving reporter,  Andrew Spittle

February 2016: Leaving the rest of the Snowriders WA team in Hokkaido, Japan (see review here), our roving reported, Andrew ‘Spitty’ Spittle, jumped on a plane and traveled due-east across the date-line to Salt Lake City, Utah USA. Located in western USA, the great state of Utah is defined by its vast expanses of desert and the Wasatch Range mountains. While Utah does have its fair share of desert terrain, and rocky outcrops, there is so much more going on in the busy “beehive” state, with a raft of outdoor adventure activities topping the list, including snow sports…..in fact Utah boosts 7 skiing areas and 14 resorts, some of which are exclusively for skiiers (no snowboarders allowed, as draconian as that sounds!!). Our intrepid reported Spitty provided the following account in his own words…..

Image: ‘beach weather’ at +13 degrees C – the author in Park City
At the time of my visit, snow conditions in Utah were vastly different to those in Niseko: warm + degree C temperatures and blue skies (quite a contrast from the overcast and powdery conditions experienced in Hokkaido)… However, despite the unfortunate – and somewhat unusual – lack of snow, my experience of Utah (four days at Park City and four days at Alta) was unforgettable mainly because of the type and extent of spectacular, and at times impossibly steep terrain, which was very much a challenge for me (as a very seasoned skiier), and I’m sure anybody else.

The state capital Salt Lake City is less than an hour’s drive from most of Utah’s 14 world-class ski resorts, and my first stop Park City is only 35-40 minute drive from SLC airport. With multinational ski juggernaut Vail Resorts taking over the reins at Park City, one of their first moves was to create the single biggest ski resort in the USA by merging it with Canyons resort. Park City is built for volume, with over 1.6 million skier visits a year; it’s all about getting you up the mountain efficiently, with gondolas, quads, and six seated lifts cranking, but it is surprising how little time you spend in the lift queues.

My last days skiing in Japan was after a serious powder dump and a bone chilling -22C, so when I arrived in Utah at the beginning of March to plus 13 degree C weather, it was quite the contrast….Not to be daunted, we ditched the powder skis for the all mountains, and headed out for a look.  Mornings were typically ‘bullet proof’ with the snow softening through the day. So it was a case of dodging the ice, and “following the sun” for the softer, more forgiving (and much more enjoyable) snow. To my relief there was plenty of good terrain to be had out on the mountain, and with over 300 trails to explore over four days, the skiing was never dull….especially given the early emergence of the local wildlife, including porcupines and a mother moose with its calf….no one told them it was still winter.

The town itself has a rich mining history and still has a frontier feel about it. There are many remnants of the silver mines scattered around the resort, and some of the old buildings refashioned into resort facilities. Main street is packed with bars and restaurants filled to the rafters with happy skiers recounting their days adventures out on the slopes. The No Name Saloon is the most popular drinking hole in town, and besides the “ye olde” mining memorabilia, and the sport on TV, the main attraction is shuffleboard. But getting your name on the chalkboard to reserve your spot is harder than the icy double black diamond moguls! 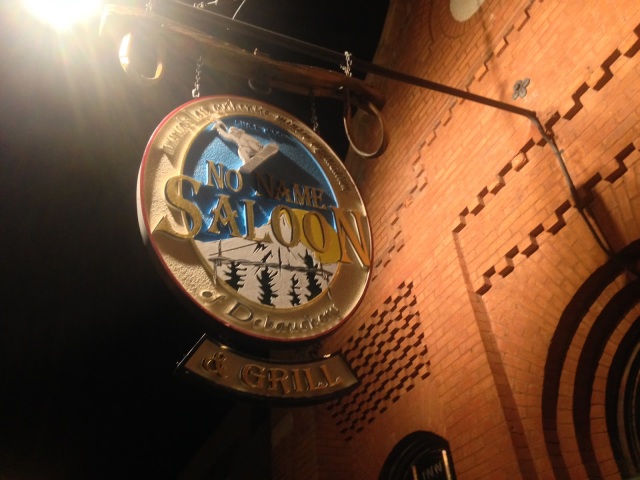 If you wake up feeling like a mountain lion with a sore head after a night on the town, you will need coffee! Not the reheated dishwater that Americans call coffee, I mean real freshly roasted and brewed nectar that restores your ski spirits. Luckily at the bottom of Main Street is a “Ridgy Didge” café called Atticus that squeezes all the magic out of locally roasted beans (even if you have to line up for 20 minutes!). Despite the wait, I waited patiently then hungrily devoured a mug full to get my ski legs functioning properly.

Slightly further from Salt Lake City but closer to skier nirvana is Alta, where you will find plenty of snow, endless steep runs, and few lift queues. If Park City is to Perisher (bigger resort and lot’s of visitors) then Alta is to Mt Hotham (steeper terrain for more experienced skiers). Alta is a “skiers resort” where you only need turn up if you are serious about your skiing, as there aren’t too many green runs here, so it’s a mountain that will bite you on the arse if you don’t have your ski game on. 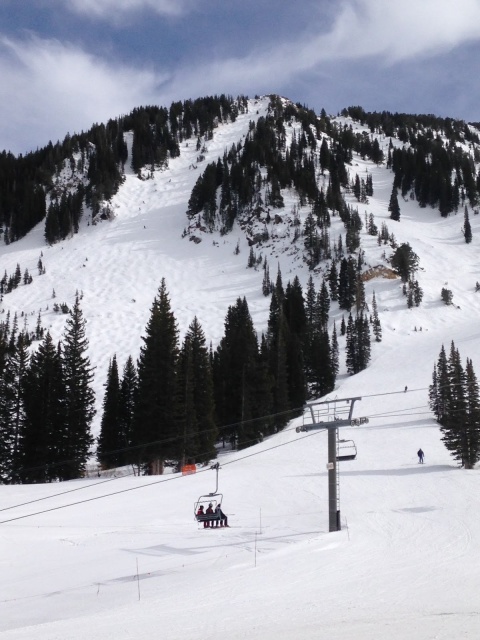 There is one catch here though, as this is a skier only resort, that means don’t bother bringing your snowboard. It may seem unfair, in fact it probably is, but many have tried to fight it on the hill and in the courts, and failed. But you can enjoy the same terrain and snow next door at, Alta’s lift linked sister resort Snowbird.

Alta is one of the most challenging mountains in North America, but also has to be one of the most beautiful, with rugged rocky cliffs rising from the base altitude of 2600m to over 3200m. If you are standing still long enough there’s photo opportunities whichever way you look. The higher altitude tests your fitness, particularly when climbing the stairs of your lodge!

The local’s tell us that Alta’s higher snowfall (14m) is due to it’s “Canyon effect”, where the weather systems travelling across SLC’s salt lake and sucks up the moisture which is then funneled along Little Cottonwood canyon and eventually dumped on the cold high altitude terrain. Unfortunately Alta wasn’t at it’s best when I visited, so what would have been challenging black powder runs was icy hard suicidal double black diamond mogul runs. In fact the traverses to off-piste runs were even more dangerous, but that’s a story for another day. 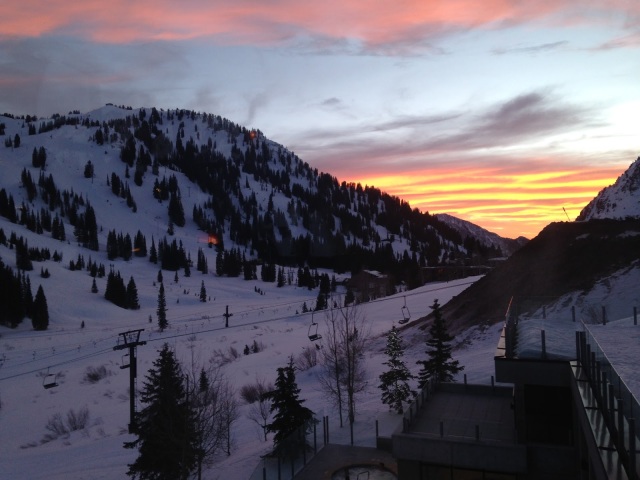 After spending the day tackling both on and off-piste runs with fellow lodger Jim, we were in the end a little bit beaten up by the mountain, and needing some guidance on how to tackle this beast that is Alta. So what I did try was Alta’s Advanced Off-Trail Workshops (private off-piste lessons), and after internal debates about lesson versus fun, I headed out with seasoned Alta instructor Les. This gave me instant access to the best spots and the best snow for the day, at the right time, at $85 each for a 3-hour lesson and guiding, it was a bargain! Les had nerves of steel and a deep understanding of the mountain only a local can have.
Unlike most ski resorts, there’s hardly any village to speak of, just a handful of lodges and private villas, but fortunately I was lucky enough to be staying at one of the coziest ones at Alta. Snowpine Lodge offers an all inclusive delicious breakfast and 4 course dinner, and for solo travellers like myself were offered a communal dining table where many holiday friendships were struck up.  Alta is “that place” that you return to again and again, hoping to tame the mountain, good luck with that!

About the Author:
Andrew ‘Spitty’ Spittle (above is a veteran TV producer and camera man from Perth, Western Australia. He is a self confessed late bloomer and admits that as a beginner skier, he never took lessons, choosing instead to tackle the mountain on his own (often face first). In 2011 Andrew had an epiphany and headed off to Japan to train as a ski instructor at the Niseko Academy, where he gained an NZSIA level 1 accreditation. He claims it was to improve his skiing, but really he’d heard that chicks just really dig ski instructors. Andrew is lucky enough to have skied in Switzerland, NZ, Canada, Australia, Japan, and even Scotland.