Nestled in the Pir Pajals, one of the six mountain ranges that make up the Himalayas, Gulmarg is a small town in Kashmir, in northern India. Gulmarg, which means “Meadow of Flowers”, sits on a 2,650 m plateau at the base of Mount Apharwat (4,124 m). The Pir Panjals receive up to 14m of snow annually, with regular snow-storms bringing several meters at a time. It is therefore no surprise that Skiing Magazine (USA) recently called Gulmarg the 7th snowiest ski resort in the world!

If you an advanced to expert skier or boarder, with a longing for adventure and a hankering for virgin powder, then Gulmarg in the Indian Himalayas could be the experience you’re looking for.  Our roving reporter, Matt Appleford, reports…

The resort of Gulmarg, nestled high in the Indian Himalayas, is a powder paradise in the most unlikely of places. Interestingly, it lies in the disputed territory of Kashmir, an area over which India and Pakistan have fought three wars, the latest in 1999. However, with the skirmishes now over (for now), Kashmir is once again quiet….

Those visiting Gulmarg for the first time will be immediately struck by its size. You’ll also be struck by its altitude. Maxing out at close to 4,000m (the highest lifted point), the resort opens up to stupefying amounts of vertical; some of the bowls off the summit, for example, have a straight 1,200 metres of thigh-destroying vertical descent (Powderhound).

The resort is serviced by a series of lifts, including several surface lifts in the resort’s beginner’s area, and a 2-stage gondola system. Built by the French company Pomagalski, the Gulmarg Gondola is one of the highest in the world. The first stage transfers from Gulmarg at 2,600 m to Kongdoori at 3,080 m. The second stage which has 36 cabins and 18 towers, takes passengers to a height of 3,950 m on the Apharwat Peak (4,200 m). A chair lift system connects Kongdoori with Mary’s shoulder for taking skiers to higher altitude. The Gulmarg gondola, provides access to a a fairly substantial in-bounds area (essentially consisting of a very large bowl) and an enormous out-of-bounds area, consisting of a further 33 named-bowls, most of which remain pretty much untouched owing to Gulmarg’s lack of crowds, especially in March (peak season is February).

Gulmarg’s in-bound area, or the ‘gondola bowl’ provides world class skiing in an avalanche controlled environment.  The area is assessed daily and explosives are used as necessary by Ski Patrol to ensure the slopes are safe.  The runs back down to the gondola mid-station are varied, long (930 m) and at times steep, and all sure to get the thighs burning.  Gulmarg’s substantial out-of-bounds area, for which the resort is best known, consists of steeps (with the Shark’s fin area being akin to Alaska in pitch and degree of difficulty), open bowls, endless ridge-lines and trees. With the amount of terrain on offer and with so much powder, it is perhaps no surprise that the skiing in Gulmarg is described as heli-skiing without the price tag (need proof, check out this clip from 2015).

Image: Heading up the chairlift above the main gondola bowl after a storm in January 2013. pic: Karl Welter

Still out of bounds and heading left from the top of the gondola you’ll find four major bowls, Sheenmai Bowl, Hapat Khued Bowl, Trajan Bowl, and Saffron Bowl; none of which require any hiking – it’s all down-hill, straight from the gondola exit point (check out some footage of the Sheenmai Bowl here).  Heading right from the top of the gondola  you’ll be spoilt for choice with a further 10 bowls in an area referred to as lookers right.  The terrain here is almost limitless and as such some of the bowls can remain untracked for days, even weeks after a storm. Although easily accessible, these areas are strictly out-of-bounds, and not within the avalanche controlled zone.  It is recommended that all skiiers and boarders entering the out of bounds areas carry avalanche safety gear, and have appropriate training in ski-pack conditions, and avalanche risk.

Further out-of-bounds zones can be accessed by walking / skinning to the main Mt Apharwat Ridge, where you’ll gain access to the back of Gulmarg, or after similar shortish hikes, you can also enjoy the areas known as Far Far Side, Monkey Hill, Sunshine Peak and the home trails down to Drang, Barbarishi and Tangmarg. For the more adventurous, heading north from the top of the gondola, it’s about a 40 minute hike to the Shark’s Fin area, one of the steepest lines in Gulmarg. Such is the extent and variety of terrain, that even with multiple trips to Gulmarg you can expect to be skiing new lines every time.

One of the more unforgettable runs on the mountain is the one from the Army base down to the village of Drung…and at 11 km, the run down is one of the longest off-piste runs in the world, and one hell of a ‘home trail’.  Apart from the skiing enroute, which can be sublime, a visit to this small village is an unforgettable cultural experience. It’s well worth the visit just to experience Drung village life. Remember to take plenty of chocolate / lollies for the local kids, who are just beautiful, and expect them to hit-you-up for a ride on the back of you skis or board (ride through the village). 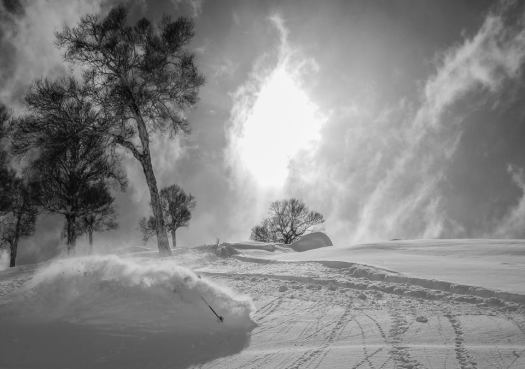 Image: Quality turns can be had in the main gondola bowl after a storm, by accessing the chairlift. Pic: The Adventure Project. Skier: Matt Appleford 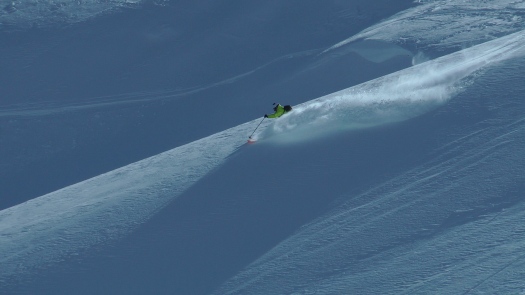 Image: Fresh tracks down the Army Camp Ridge. No hiking was necessary to get to this run. Pic: Mike Stevens. Skier: Matt Appleford

Image: Get ready to have some fun with the kids down in Drung. It’s not just about the skiing on the way down. Pic: Will Wissman. Skier: Tim Williams

What if the gondola is closed?

If the gondola is closed (typically during storm events), there is still plenty of powder skiing on offer lower down on the mountain. A favorite area to ride is in Monkey Hill. Monkey Hill is a large tree run behind the Hilltop Hotel which can be accessed by an easy 30 minute skin. Monkey Hill offers about 300 m of turns, before you can head back up and do it again.  The runs are free on Monkey Hill so you can do as many as you like, and yes, you will see snow monkeys, as per the area’s namesake!

Image: Snow monkeys are everywhere in Gulmarg and they are fascinating to watch! Monkey’s on our balcony at the Hotel Heevan Retreat in 2015. Pic: The Adventure Project.

Another pick when the gondola is closed is the Baba Reshi Shrine area. The run is unique in that you don’t use a chairlift to return to the top of the hill, but a local taxi. You can do as many laps as you like. The final option is to ski down from the mid-station back to the base. There are some nice steep pitches at the start of the run that are worth hitting, especially if you traverse out left from the mid-station. Either way, there are plenty of worthy options for riding, if the upper gondola is not operating.

A trip to Kashmir would not be complete without spending a night on the houseboats on Dal Lake in Srinagar. This is no better way to relax and unwind after an amazing trip to Gulmarg. The houseboats are small, floating hotels that date back to the time of the British, more than a hundred years ago. In more recent times (late 1960’s), the houseboats became famous for being the hangout of  British rock icons, the Beatles! 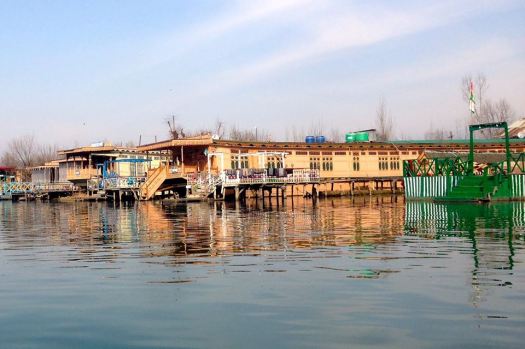 Image: Quite the view, surrounded by the Zabarwan Mountains, watching life float by. Pic: Matt Appleford

For those willing to get up a little earlier (6:30am start), then a trip by Shikara (water taxi) to the floating vegetable market, should not be missed. Watch the sun come up as your Shikara driver paddles you around the lake over to the floating vegetable market and watch as local vegetable growers sell their goods to the buyers, all done in little boats on the lake. It’s a spectacle not to be missed, before paddling back to the houseboat for breakfast and then departure from Srinagar airport.

Image: The floating vegetable market is quite the scene, something you don’t want to miss! Pic: Matt Appleford

The People and their Culture

The Kashmiri people are some of the most hospitable people in the world. They are genuinely excited to meet Westerners and are very proud to tell you of their culture and their way of life. The food is amazing (you definitely need to like curry, but there is plenty of Western style food and Chinese food if you would prefer something else, vegetarians will be well-catered too). 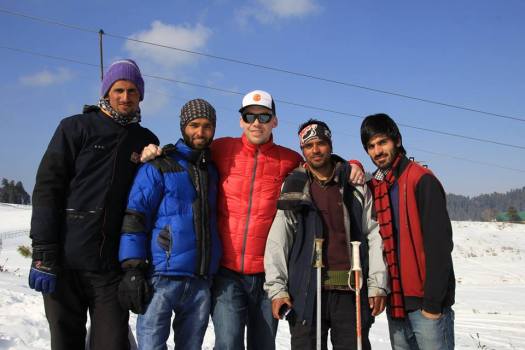 Image: Hanging with the locals down at the beginner area on the golf course. Definitely a fun way to spend a few hours if you are taking a break. Pic: Jerrod Fast for The Adventure Project