Australian snowfalls are declining – There’s little doubt about it. A few years ago now, Snowriders WA were lucky enough to acquire over 50 years of snow fall data for an area called Spencer’s Creek. Spencer’s Creek is located close to Charlotte’s Pass high in the Snowy Mountains in NSW. This data has been collected by the Snowy Mountain Hydroelectricity Commission since the early 1950’s. Snowriders WA have compiled these data for the purposes of depicting long term trends. 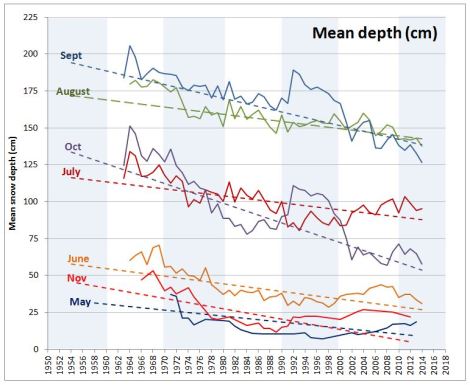 We plotted these data because we are interested (and concerned) about the effects of climate change on Australian (and indeed international) snow cover. It doesn’t take a genius to work out that the trend toward increasing temperatures does not spell good news for snow in Australia, nor does it spell good news for the skiing industry (if temperatures continue to climb). This is particularly the case in Australia and New Zealand where conditions for snow falls are often marginal to begin with.

Results of analyses presented here show a general decline in mean and max snow depths. The data is however characterised by large scale variation in snow depth, with distinct peaks and troughs in the long term trend. Much of the ‘downward trend’ is driven by very good and consistent snow falls in the 60’s and very poor to average falls in the late 80’s & 90’s. This is also evident in some further analysis that we ran looking at ‘decadal long’ and ‘5 yearly’ increments (not shown here).

When planning a ski trip in Australia, people often want to know when, and if they should book in advance. It’s no secret that conditions are often marginal in the shoulder months of June and September; but this is certainly not a revelation; in fact, this is the case in the shoulder months wherever you are in the world. The flip side of course is that snow conditions in June and September can also be spectacular; you just have to be lucky! The best months are clearly July (particularly late) and August. In 2008, average snow depths in July and August were 100 and 151 cm, respectively – certainly enough for a base, and generally enough to open the majority of lifts in the Australian ski areas. Cooler temperatures in August are reflected in the fact that max and average depths have not declined much since the 70’s.

If this is all bad news; don’t despair. The amount of variation in the data suggests that we may yet continue to enjoy skiing in Australia for many years to come. Although snow falls may not be as consistent as they once were, snow depths of greater than 200 cm are still achievable. It may be that we need to get used to more erratic (and perhaps unseasonable) timing of snowfalls , and perhaps longer periods in between falls. Thank Ullr (God) for snowmaking.

One Reply to “Australia’s snow falls are declining”